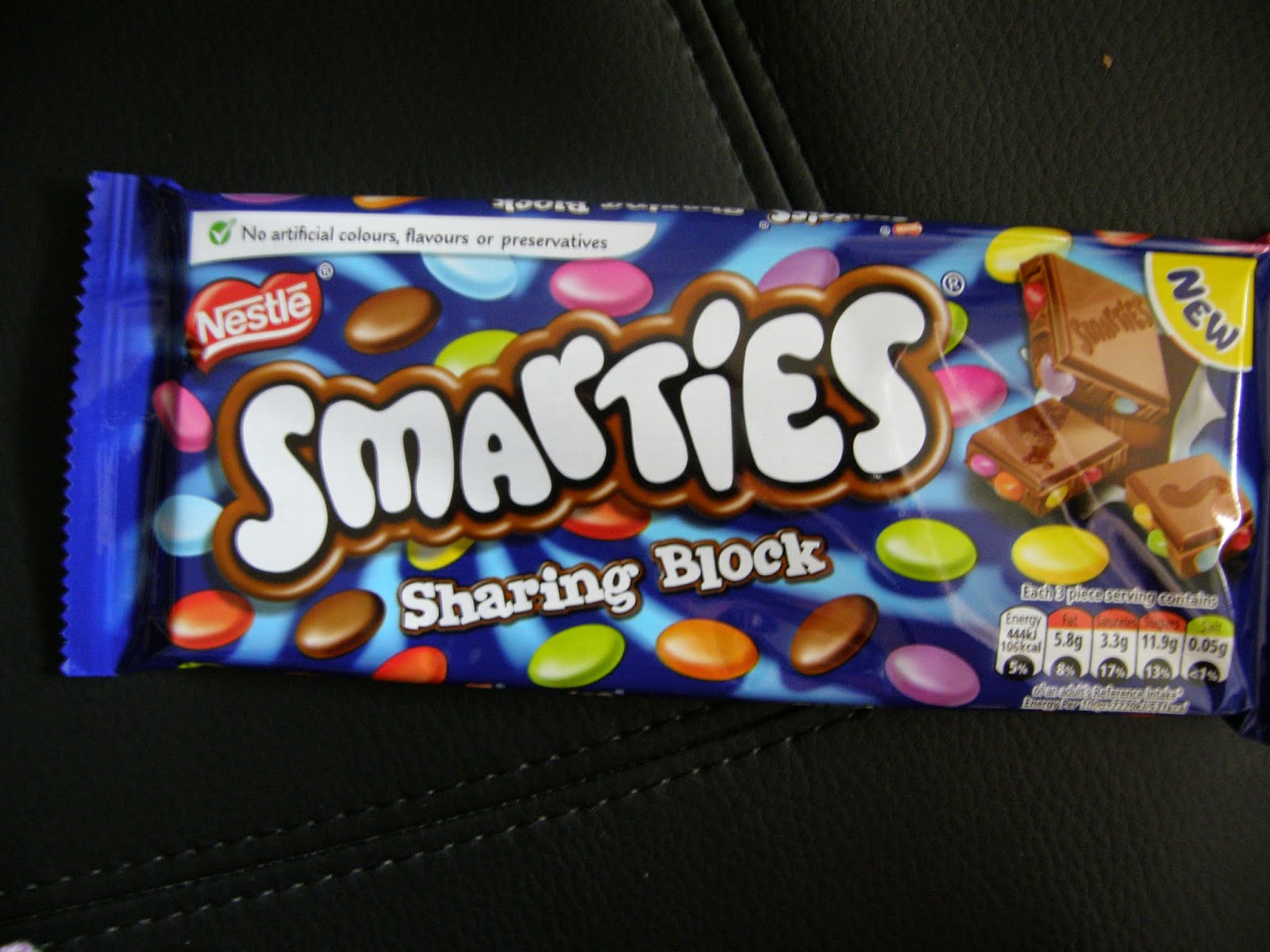 A sharing block?   I think not!  My lovely daughter-in-law gave me this today saying 'I saw this and thought of you'.  She knows I have a childish taste for Smarties.

The day out in Glastonbury yesterday for the Frost Fayre was a great success.  I went with our youngest daughter and her husband (it wouldn't have been my husband's cup of tea at all) and we arrived at about mid-day and tried to be fairly systematic in our effort not to miss anything.  All the shops were open but the town centre roads were closed to traffic.   There were stalls selling crafts and goods of all sorts lining the High Street and the one than lies at right-angles to it passing the Town Hall and Abbey entrance.   The world and his wife, grandparents, children and dogs were all there  some of whom were quite colourfully dressed.   There were street entertainers and food vendors but in spite of the throng there was a lovely relaxed atmosphere of serenity over it all. 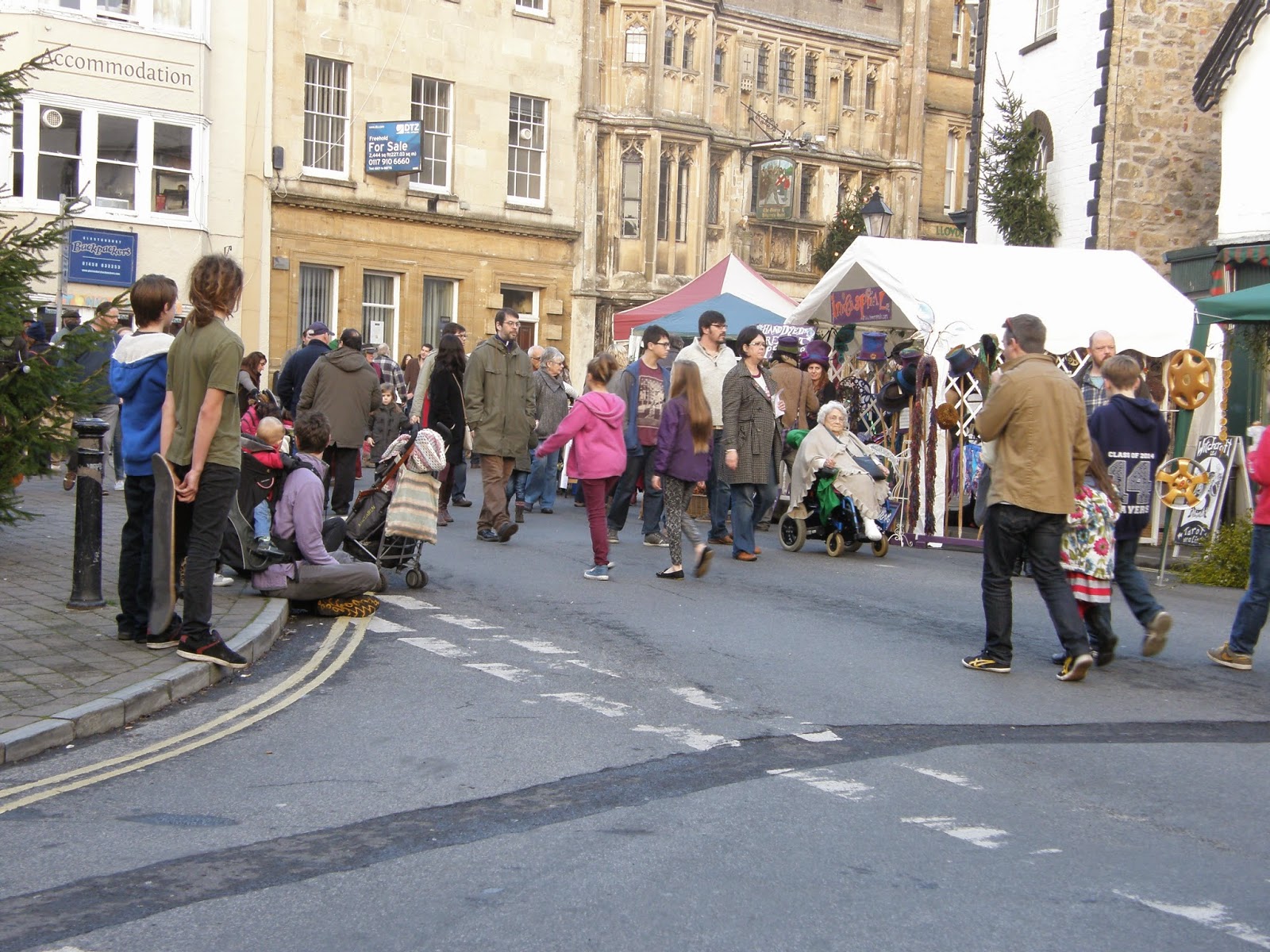 We spent about an hour on our preliminary foray and then went to our favourite pub for lunch.  All three of us chose the fish platter which was delicious.   My daughter and I had tried it on an earlier visit and thought it was even better this time. 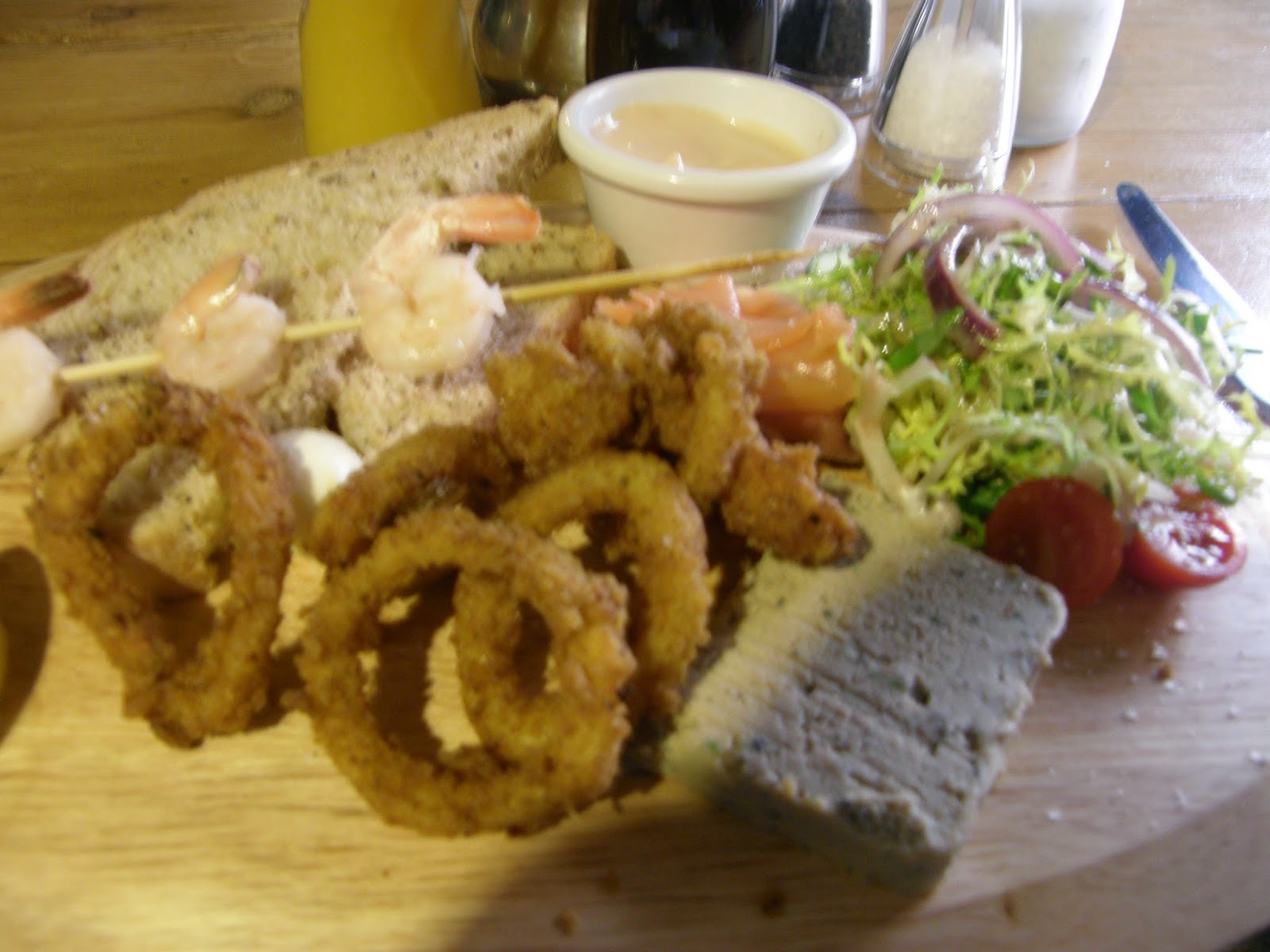 Off for more exploring - this group was good entertainment.  They asked the crowd to cheer or boo to express their reactions to Black Friday and I didn't hear any cheers, but a very clear boo. 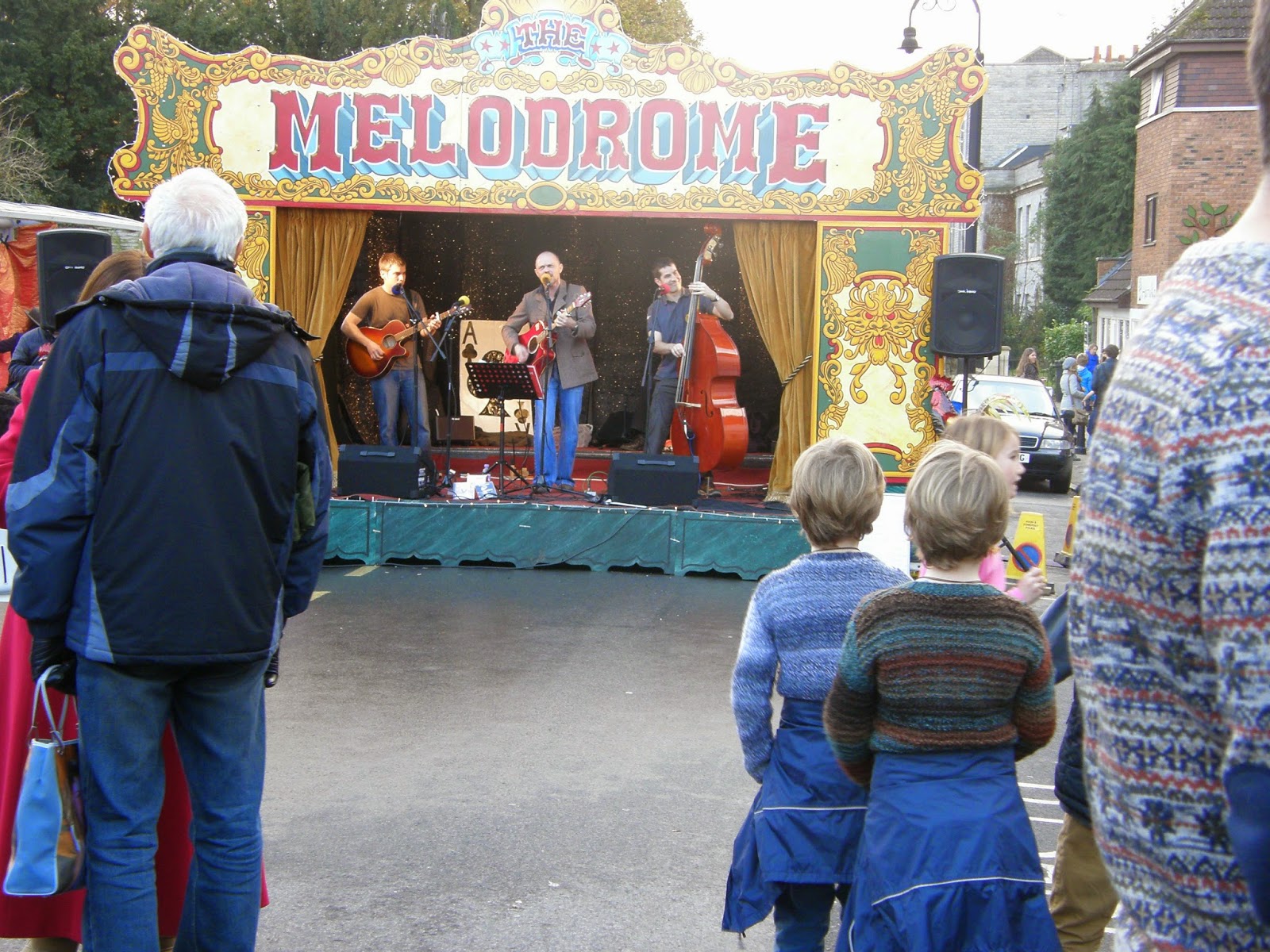 My photos don't give the right impression of the number of people there.  I think I missed the best photo opportunities in my efforts not to miss anything, and trying not to get too many shots of the back of people blocking my camera lens, or trip over anyone. 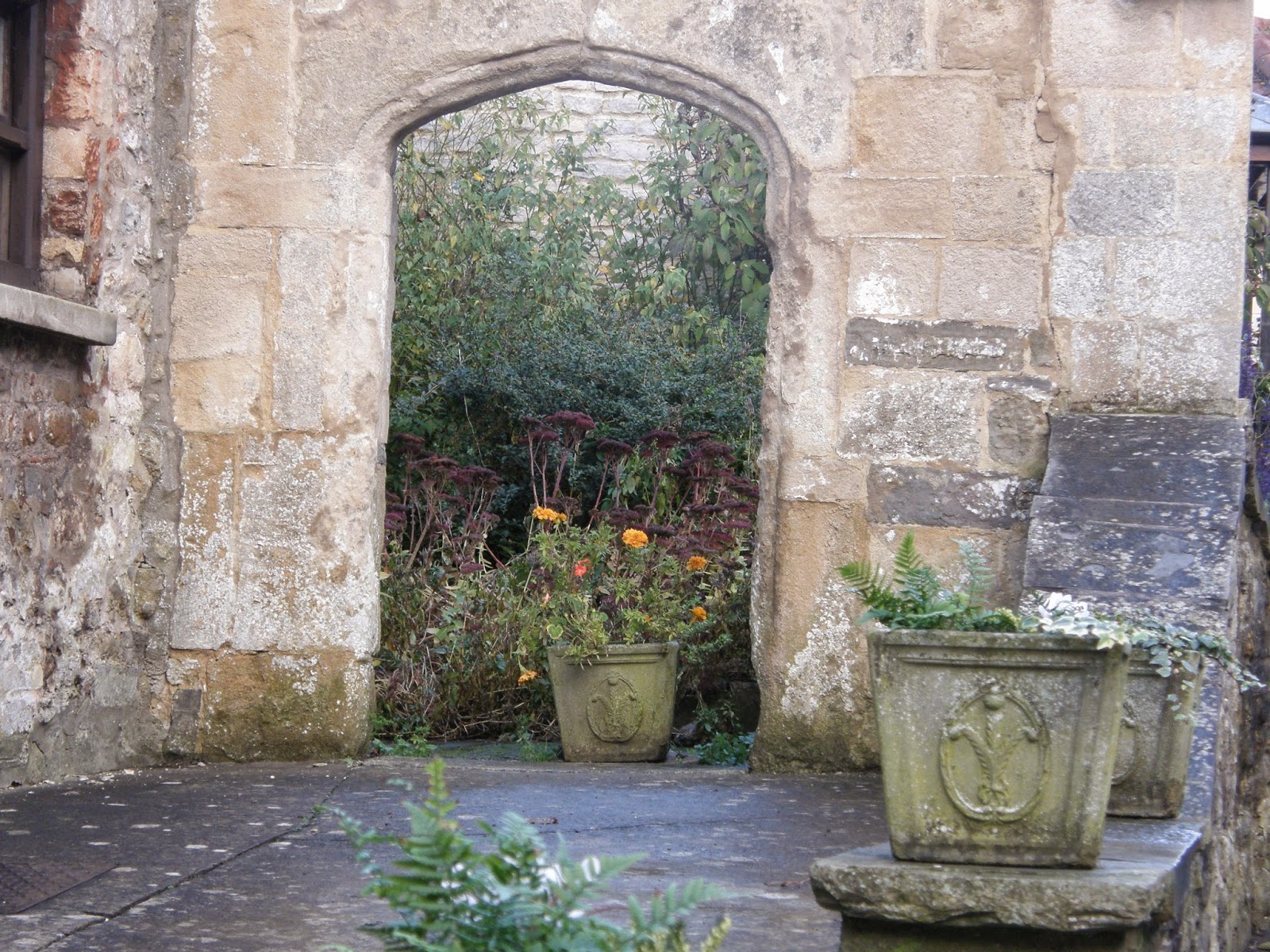 We couldn't pass up the chance of a quick look at the Abbey ruins, especially as the entrance fee had been very generously waived for the day.  This little ancient stone archway is on the approach to the visitors' entrance and one of my favourite features. 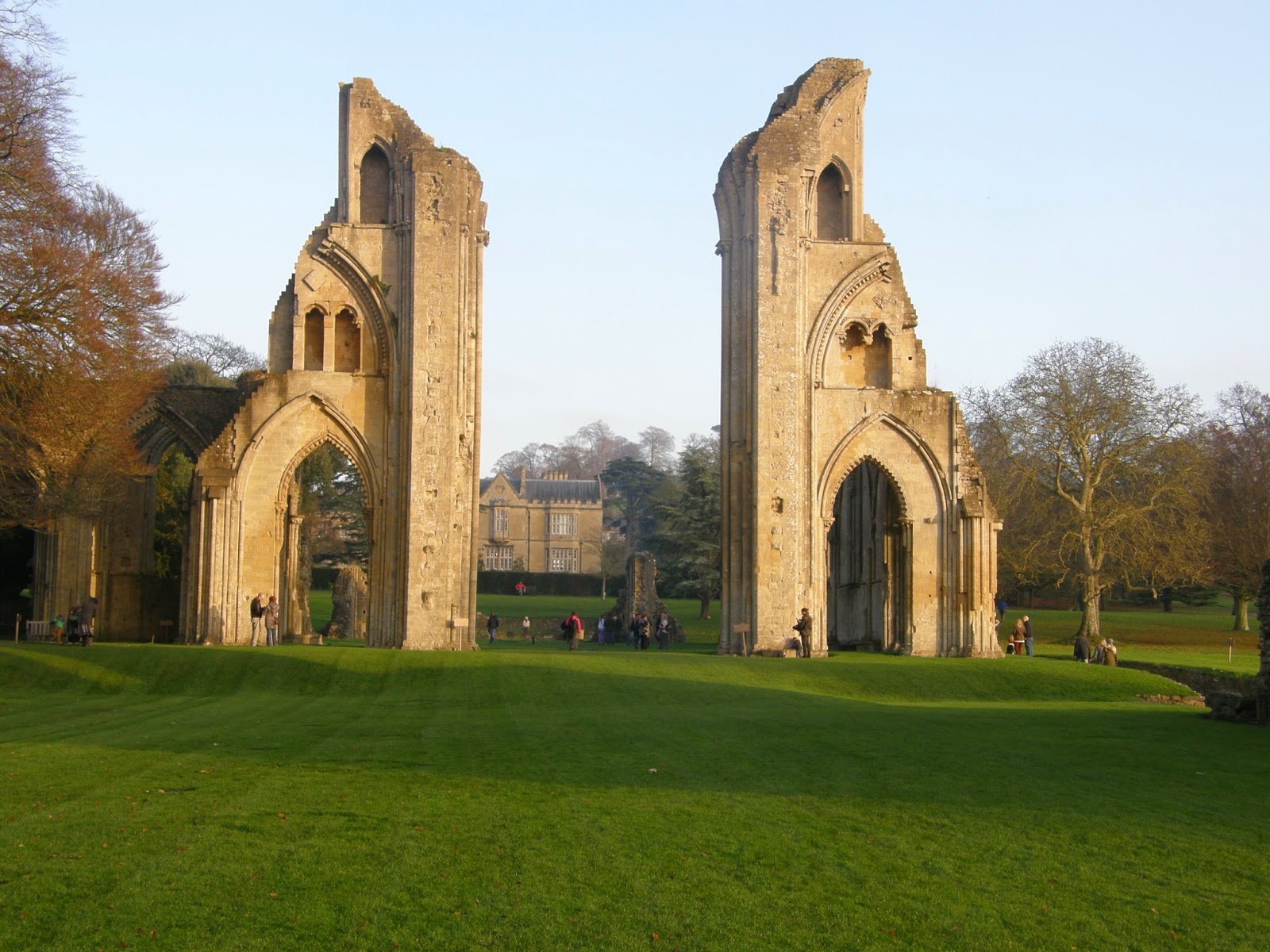 I love this view too.   There must have been hundreds of people walking around but the grounds are so big there was still plenty of open space.   A choir, accompanied by a pianist, was singing Christmas carols and songs in one area, though the large audience standing around to listen made it impossible to see whether it consisted solely of school children or adult women, or a mixture of both.  They made a very pleasant sound, whoever they were. 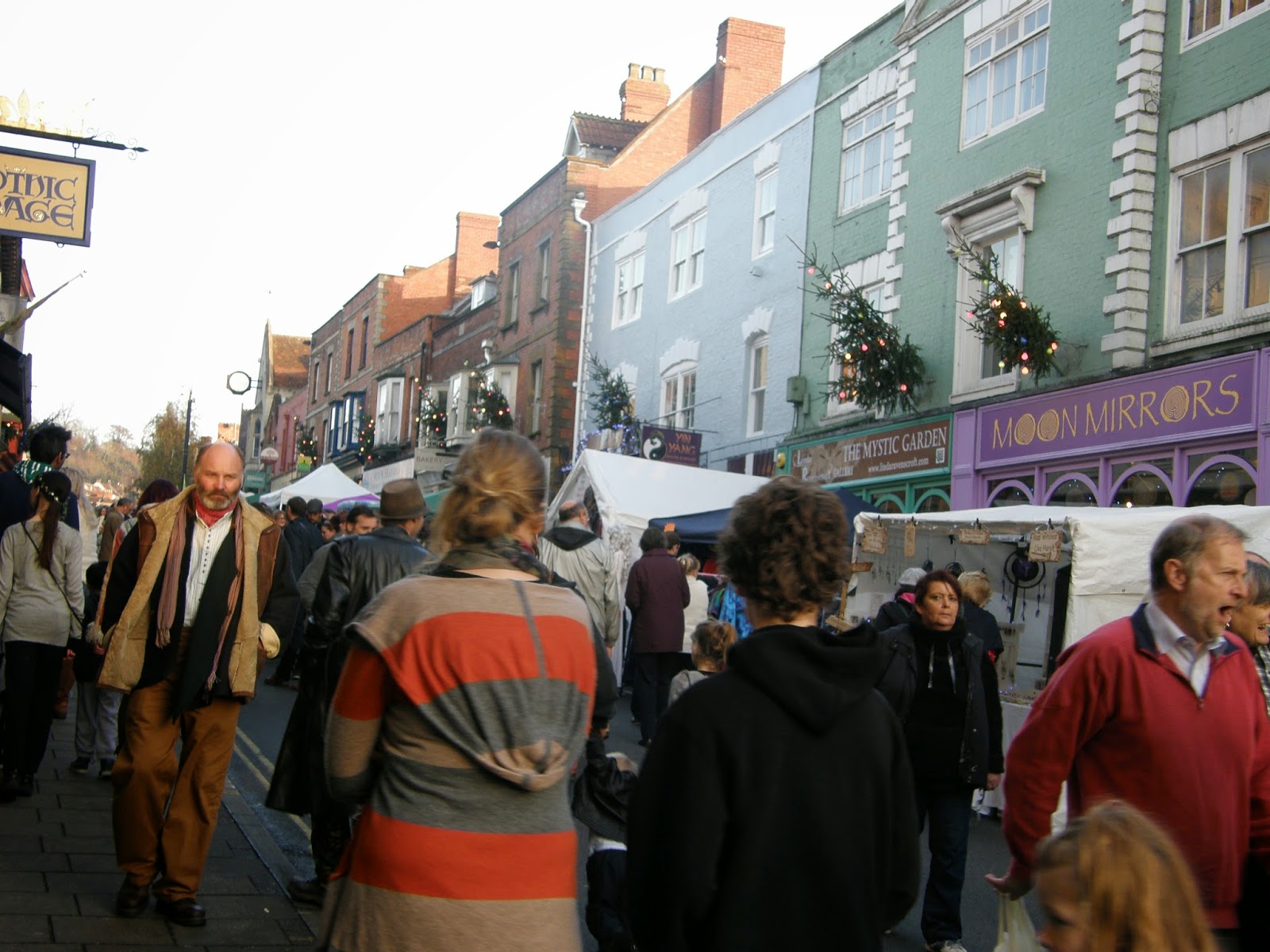 Things began to hot up during the afternoon and the crowds became even bigger.  The Christmas lights became more noticeable as the daylight faded and everywhere looked even more festive. 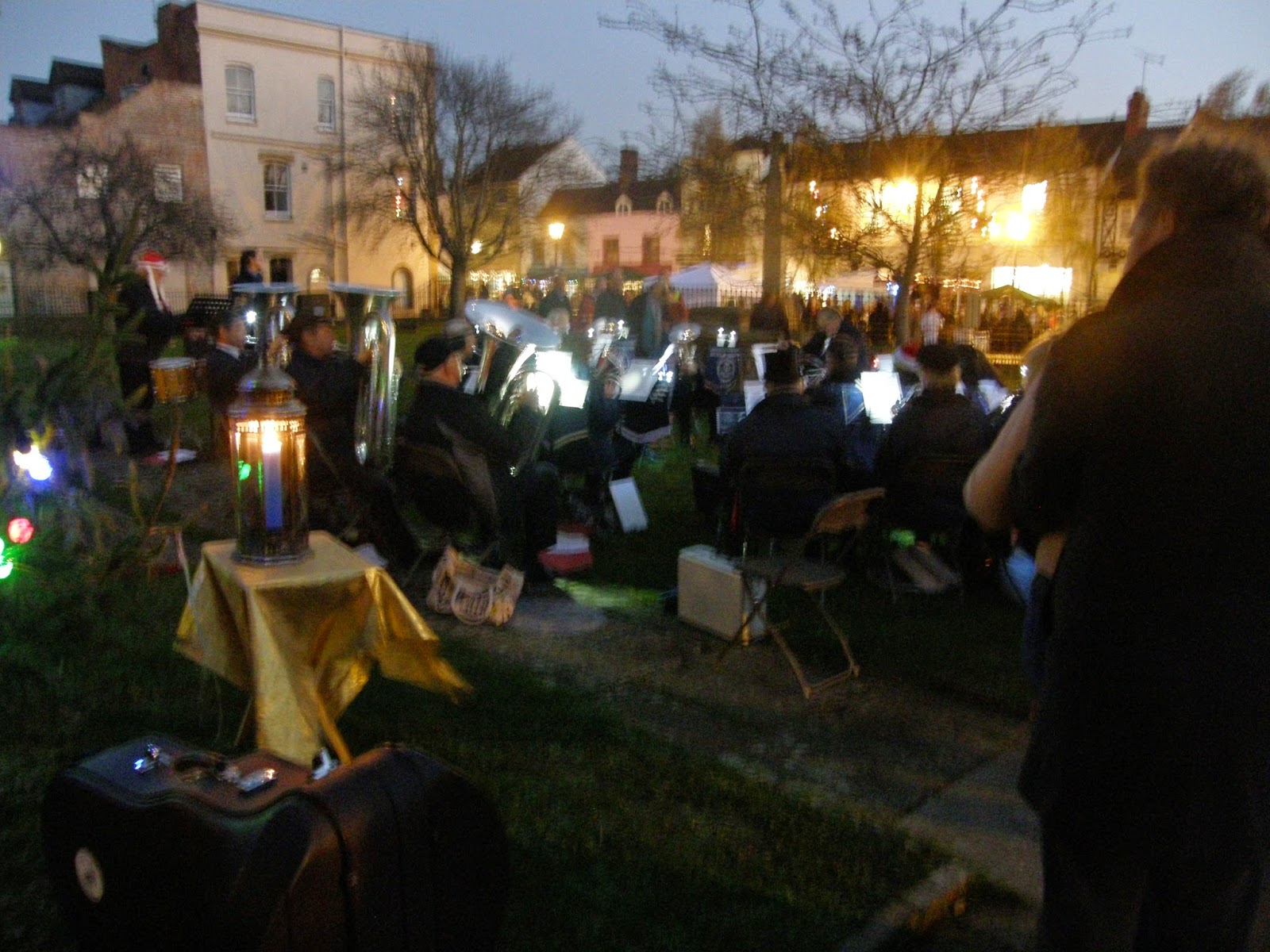 Our parking space was just behind the Church and we had to walk through the churchyard to reach it, and found the town band playing carols and Christmas songs.  There was quite a party feel to it and many people in the crowd were having a quiet sing-along.

I was quite glad to get into the car for the drive home and my legs were still tired this morning.  It felt as if I had walked miles.  I wonder if I'll be up to it next year.
Posted by Heather at 06:38 6 comments: 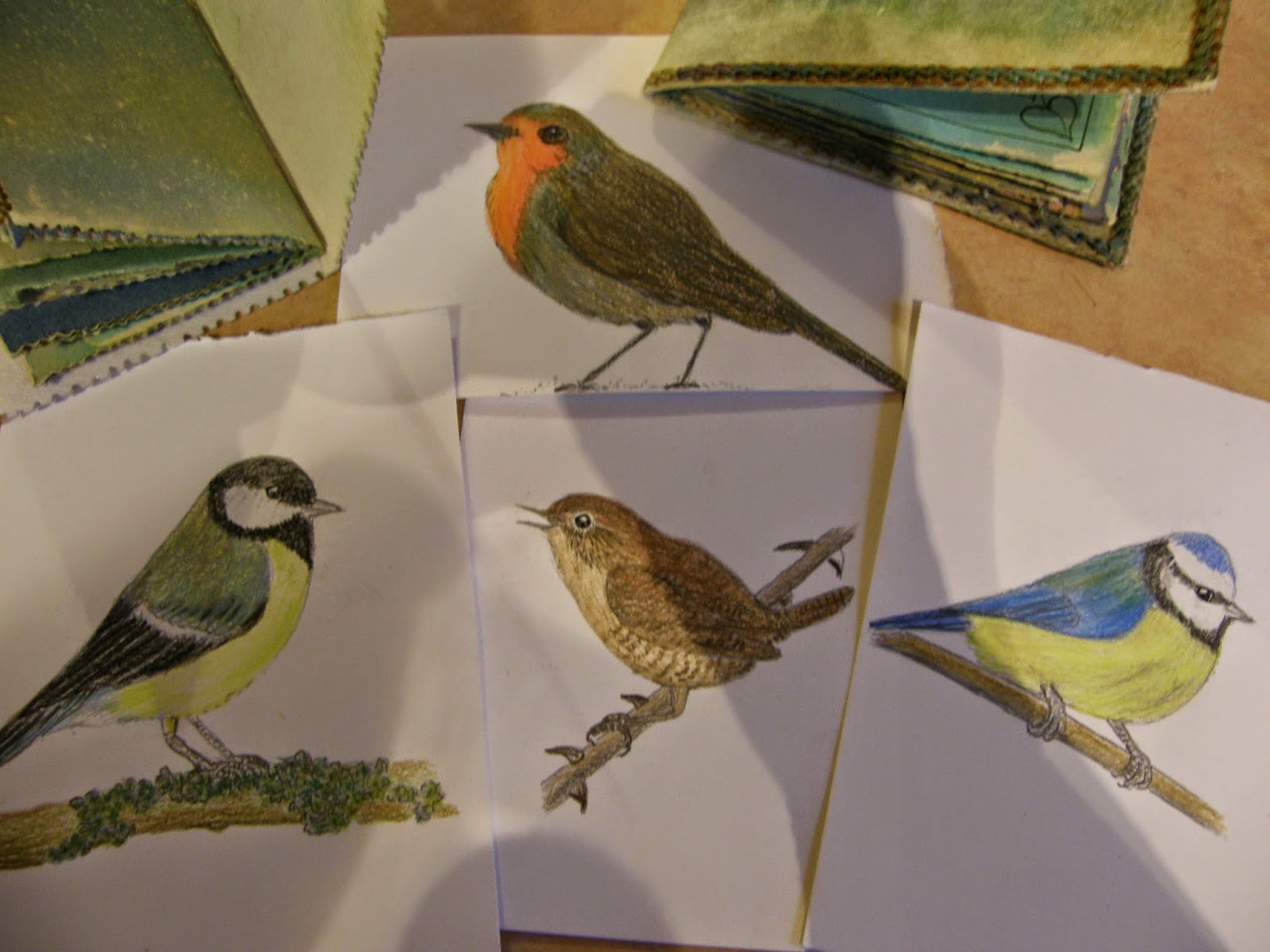 At last I have got down to some creative work again.   I have wanted to make a book featuring birds for some time, but not had the courage to try to draw them.  Today was the day and I am exhausted after drawing just four!   I thought it would be nice to celebrate all the species which we have seen in the garden and have compiled a list.   So far I have 22 different species on it - it could be quite a lengthy project.  Sorry about the shadows but it was quite dreary today and I had to put the light on. 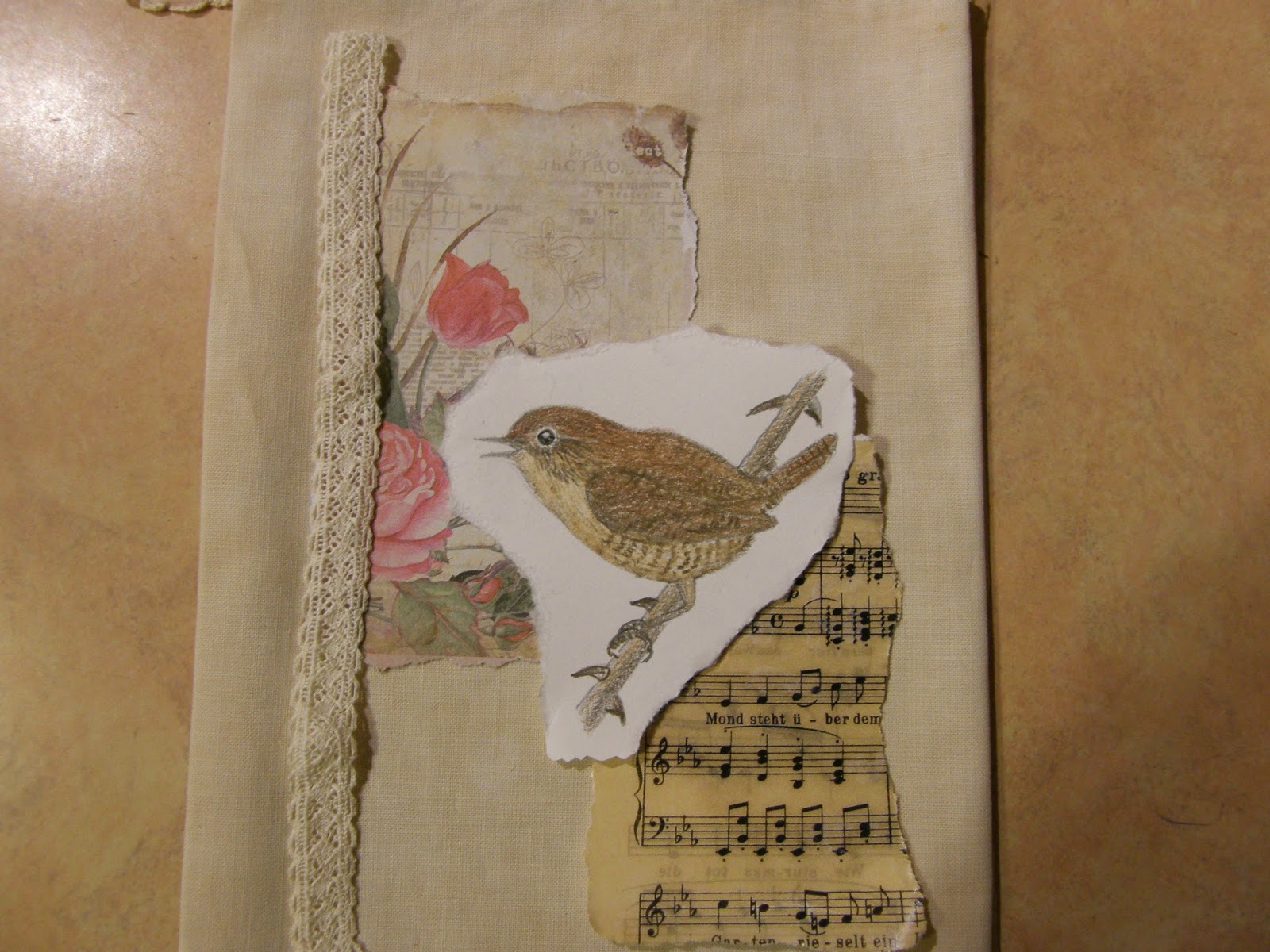 The idea is to incorporate each little drawing into a collaged page.   The first one may look like this, unless I find some better bits and pieces to incorporate.  I intend to get rid of most of that rather stark white by using a sponge and some Distress Ink.  I will also add stitching here and there, and I quite like that strip of lace down the left hand side.  Collage is such an easy technique but I find it so hard to get it to look just right.   It will keep me occupied for hours.

Tomorrow I am off to the Glastonbury Frost Fayre with our youngest daughter and her husband.  I will take the camera and hope to have some interesting pics for my next post.
Posted by Heather at 09:49 7 comments:

The Last Rose of Summer. 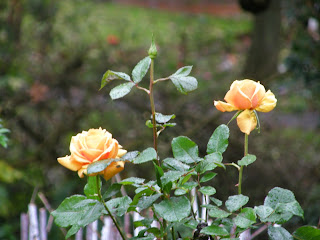 This lovely rose flowers in the summer then has another little burst quite late in the year.   It really brightens up the front garden on a grey November day. 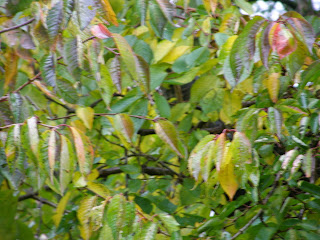 I had begun to think we were going to have a green autumn and that the cherry tree would never start to take on colour, but at last it is on the move.   The field maples which turn a lovely golden yellow have long done their stuff and dropped their leaves. 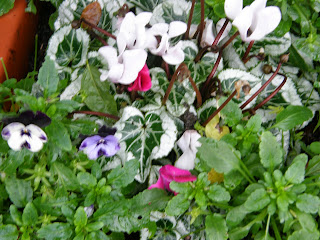 So much for my sophisticated planting plan when I planted up my tubs outside the front door.  This white cyclamen has a couple of rogue magenta flowers which were not planned for, but still look lovely, nonetheless.

There is not much doing on the creative front - too many ideas buzzing round and nothing coming of them.  I shall have to resort to housework if something doesn't turn up soon.  Desperate measures indeed!

A rather soggy morning. 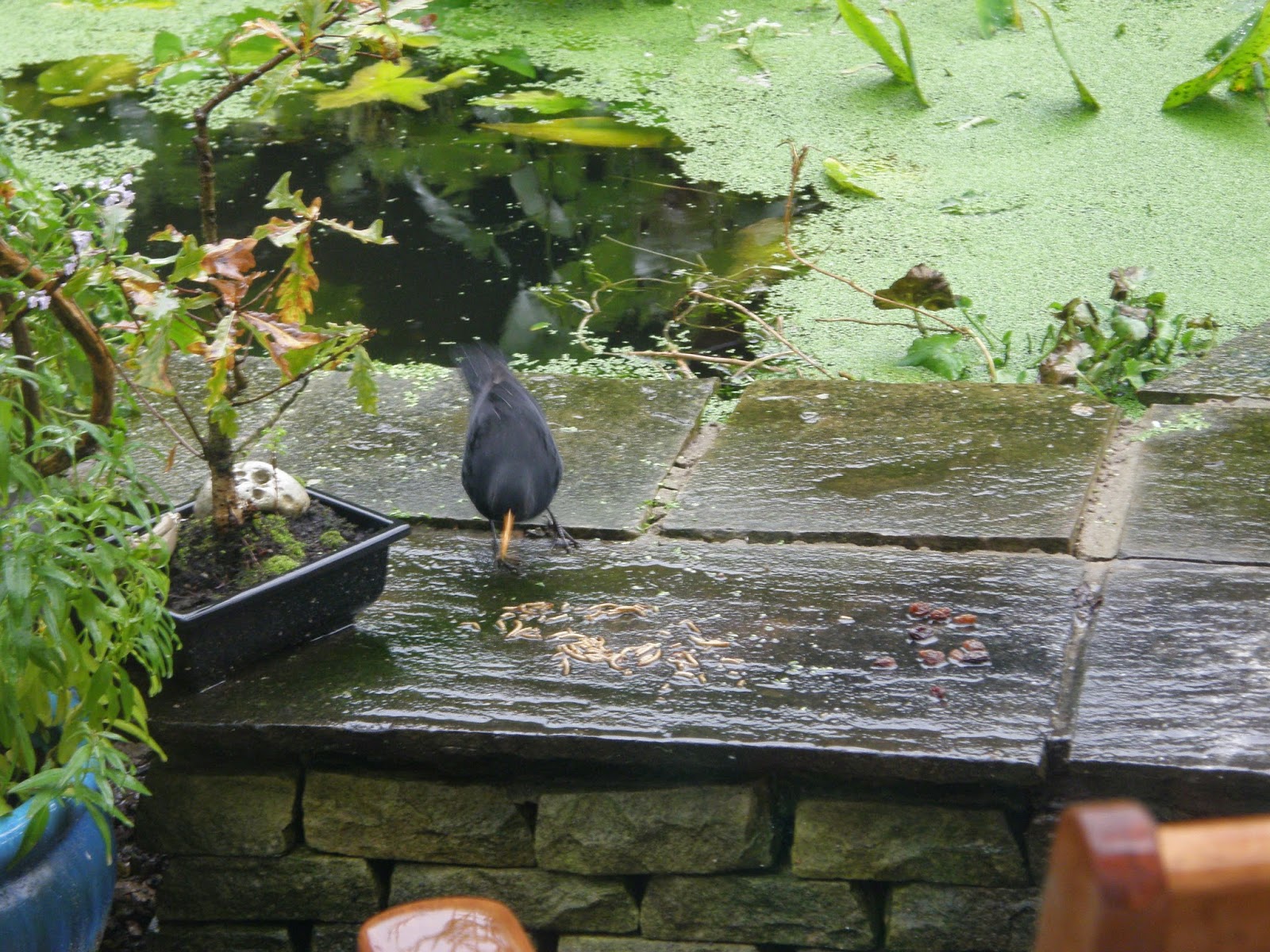 One of our regulars dropped in for breakfast in the rain.  He doesn't seem to mind that the mealworms are getting a bit soggy.

I can't believe it is so long since I last put a post on here but I haven't been completely idle.  About three weeks ago I wanted some knitting to do so made enquiries in our local wool shop about this year's charity project.   I learned that we could knit anything we liked, to go into a sale in aid of a local hospice, and everything had to be handed in by tomorrow.   So I have had sparks flying off my knitting needles and have been steadily working my way through a huge bag of assorted balls of wool which I bought in a local charity shop.   The quantities and colours varied as you can imagine so I thought that quickly made useful items might be best in the circumstances as time was of the essence. 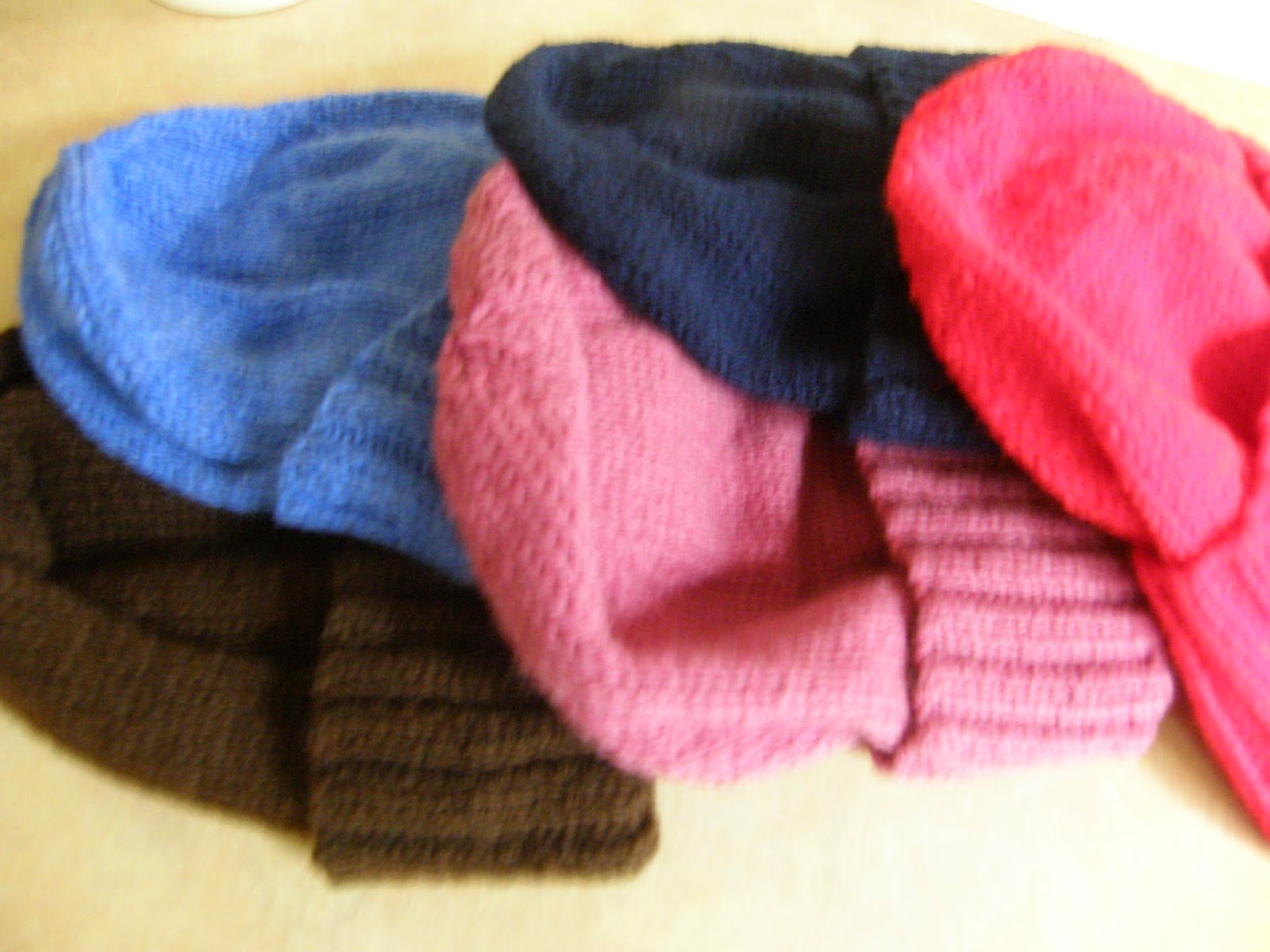 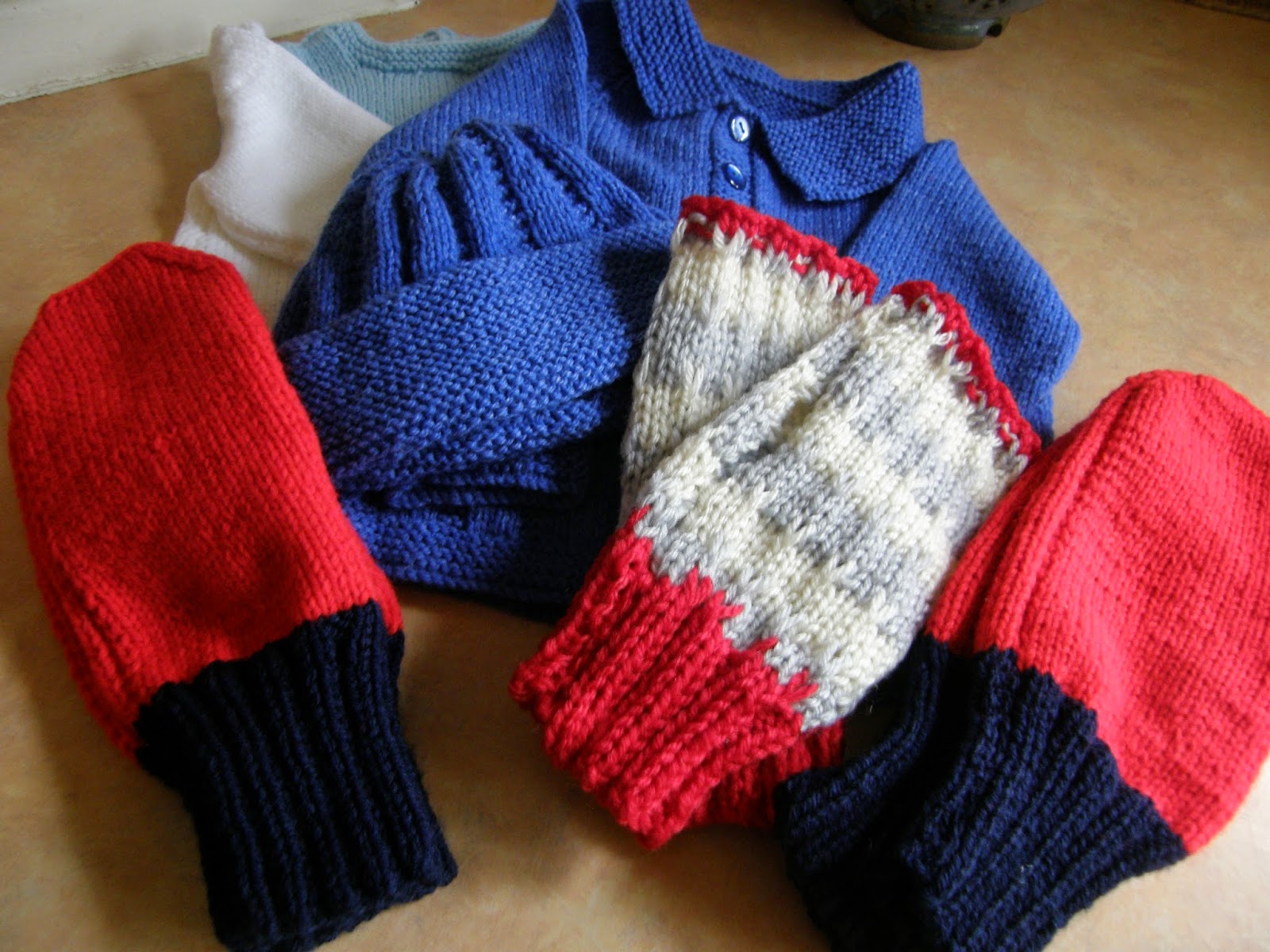 two pairs of mitts, wrist warmers and a couple of baby jackets and hat. 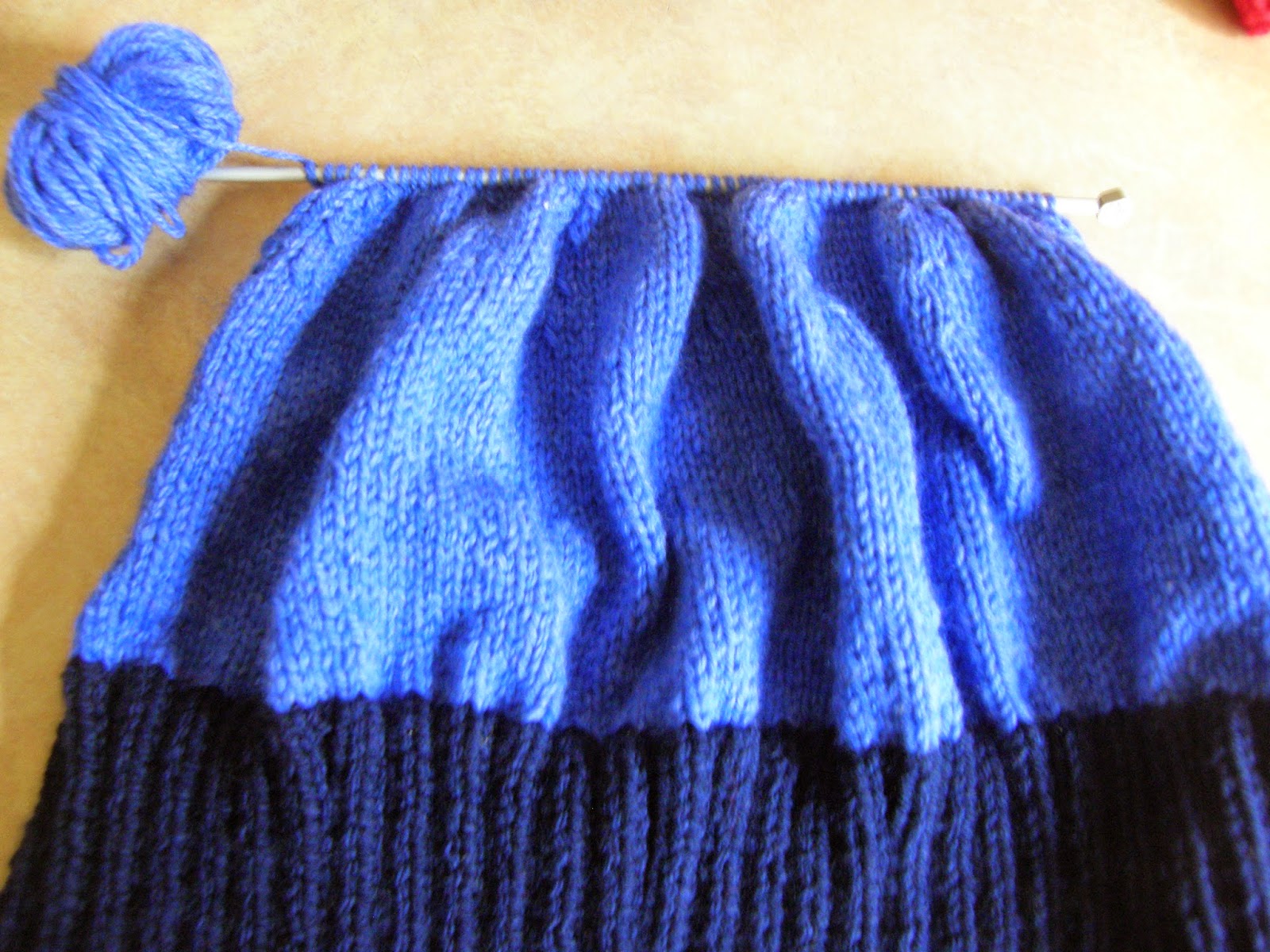 The final hat is still on the needles and I wondered if I would have enough wool to finish it.  All is well - since I took this photo I have finished the hat with a little to spare.    I found a pattern for a very good looking teddy bear but he would have needed special yarn and the making up and finishing takes so long, so I opted for the more mundane hat and mitts, etc.   Quantity rather than quality perhaps.

There is still quite a lot of wool left but I am out of time, so the charity shop can have it back and sell it to someone else.

It is still quite mild here today but not like Friday which was ridiculously - and worryingly - warm for this time of year.  I wonder what winter has in store for us this year.
Posted by Heather at 05:53 8 comments: