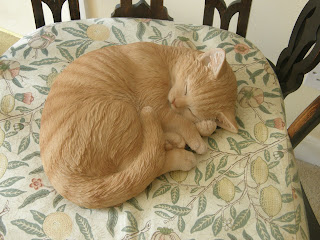 We paid a visit to a large garden centre recently.  There were various retail outlets under the same roof and shopping was done!   We are not permitted to keep a pet in these flats and I don't think I would want the worry of one any more, and can get plenty of real cuddles with my daughter's dog. 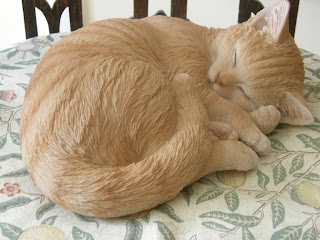 However, at the garden centre there was a huge display of dogs and cats, some of which were so lifelike.  I think they have been cast in resin or something similar.  I would normally choose a dog as a pet but the best ones were too large for a tiny flat, or not really lifelike.  I walked past this puss several times telling myself not to be silly.  When it neared the time to leave I thought 'will I regret not buying it when I get home'?   Obviously the answer was yes.

The top photo is nearer the true colouring but the bottom one shows a bit more detail.  I have called him Orlando, after Orlando the Marmalade Cat from the books by Kathleen Hale which I had as a child.  My neighbours have asked me if he has settled in well.  No need to put butter on his paws.

No, I haven't lost my marbles - just enjoying revisiting childhood.
Posted by Heather at 04:18 9 comments: