A Day of Mayhem! 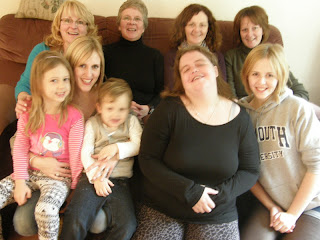 I spent a lovely day today in the company of four of my 'babies', some of their babies and one of their baby's babies!   There were four generations of us.   It was total mayhem but great fun and the noise was augmented by one daughter's dog who was very excited to have the two little ones to play with.  I apologise for the poor quality of this photo - I couldn't stand back far enough to get a better picture and had to hurry so that one of the party could keep an appointment.

The day was largely unplanned and began simply enough when our eldest daughter asked if I would help her cut out a dress pattern.  Her daughter said she had the day off and could she come too - I suggested they stay for lunch - the news got round on the family grapevine and before I knew it there were 10 of us!

My husband wisely retreated to somewhere quieter until the coast was clear.
Posted by Heather at 13:33

what a wonderful impromptu day for you Heather. good heavens - how many babies do you have???

How amazing Heather to have so many -daughters of daughters (and son) of daughters!! If that make sense. I am sure you had a lovely day with them all.

What a wonderful family photo Heather and such a pity that you yourself was not in it too!

Five in all Carol. Our son is the eldest and big brother to his four sisters.

What a lovely family, the girls certainly out number the boys.

What a lovely day you must have had, impromptu gatherings are always the best. Cheers

Oh...lucky you Heather; it sounds like a great day :-) But you should have been in that picture too!
X