Look who drops in for breakfast. 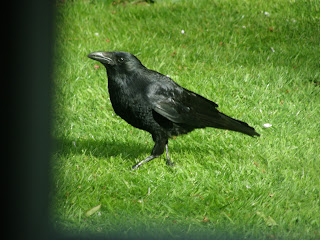 This handsome fellow comes for breakfast most days now.   He carefully chooses a piece of bread from the lawn, then hops to the birdbath to dunk it before he eats it.   He also likes mealworms and flew off with a beak full the other morning, so is generous enough not to eat all the goodies himself. 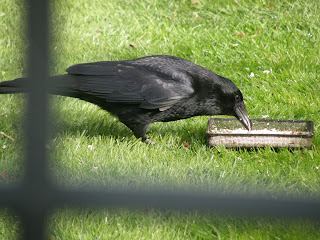 It's a pity his singing voice is so harsh.  The other morning he and his relatives sounded as if they were having a row - they made such a racket but might have been making beautiful crow music together.

I have just been round the garden and noticed daffodils and celandine still in bloom along with acquilegia and clematis about to pop any minute.   What a crazy season we are having.   I am frozen in spite of wearing a warm jumper and a light fleece jacket, AND the heating is on!   I know, it is dreadful having it on in May but I'm cccccccold.   Just off to make a hot drink.
Posted by Heather at 01:50

Great pics. We have a hen pheasant nesting in my garden - chicks due to hatch any time now but a very cold wet night with snow on our hills!! x Jo

lovely Heather. unfortunately our blue tits have abandoned the nest. they were feeding at the w/e and I guess the chicks must have died. sigh... heating on here too.

How lucky you are to have him - ever since I put a new type of fat-ball with mealworms in our garden, a pair of jackdaws has decided to dine chez nous - they go through about 10 a week, but they are so much fun to watch! And yes, it's absolutely freezing here too.

Lovely photos Heather,I am sorry it is so cold still - we are still waiting for the weather to cool down here! Cheers

What a smart chap in his Sunday best, great pic. Hope you have the sunshine this morning, it was really cold here too yesterday.

What a privilege to have that one as a visitor to your garden.

My heating is still on too, I can't stand being cold.

We've had the heating on too Heather. Brrrrr! Beautiful birds despite the noise.

Lovely photo - what a big boy he is! I can't work if I'm cold, my brain freezes up, so I'm voting for the heating being on FULL.

What does the workroom look like? Did the clear out spark new creative inspiration? I hope so!

He's lovely. We have some that visit too but only occasionally. We back onto field and the bird life here is a constant joy.
There was a green woodpecker on the lawn this morning, pecking away for ants with that enormous beak. Unfortunately, he or she flew off before I could get my camera lined up and ready.

Just back from holiday Heather - quite cold in Norfolk but lovely hotel and quite dry so we got out and about a lot. I love that crow - I think they are much maligned.

A very handsome chap. Heating is most definitely the order of the day.