I've been shirking - but I have been poorly. 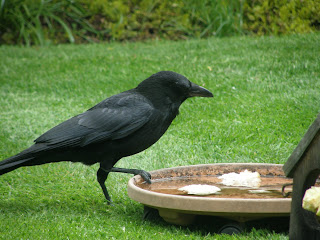 This is a new visitor to the back garden - he pops in most mornings for breakfast and dips crusts of bread into the lawn birdbath to soften them before tucking in. After eating several pieces he often flies off with another piece in his beak. We had a greater spotted woodpecker on the peanuts in the front garden this afternoon but before I could get to the camera it had flown off. 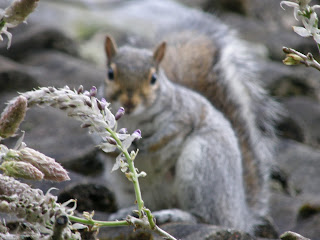 This is another frequent visitor, and very cheeky with it. I opened the front door to see it sitting on a low branch of the wisteria just above the porch. Of course I startled it and it disappeared but when I stepped outside with the camera I found it sitting on the tiles just above the guttering over the porch. Look at those lovely fat wisteria buds - it's going to look wonderful later this month. 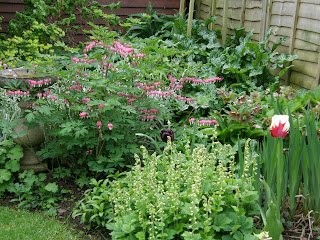 I can't believe the amount of growth in the garden over the past few weeks. There is hardly any soil to be seen - everything has taken off and the stone birdbath has almost disappeared among all the foliage. 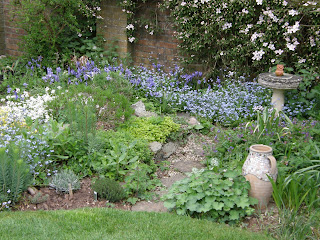 I love bluebells but they are a mistake in a small garden and will insist on marching onto the rockery and pushing up in the middle of other plants. I am always having to dig them up but their number never seems to diminish. The forget-me-nots are so well named and a lovely reminder of a dear neighbour who moved to New Zealand with her family some years ago, but not before she had given me just one little plant from her garden. They have happily spread throughout mine and if they turn up where they are not wanted I just pull them up, otherwise they have freedom to flower where they please.
.
I have been rather lazy this week owing to a heavy head cold which has drained all my energy. For two days I was so busy blowing my nose there was no time to do anything else! The 'allotment' piece is crying out for more work and I'll try to do more on it tomorrow. It's our next group meeting on Tuesday and I shall need something to take for our Show and Tell session.
.
I was hoping to do this post two days ago but problems with this contrary contraption prevented me from doing so. After driving me to distraction then, it is now behaving beautifully and butter wouldn't melt in it's mouth. Aaarrrrggghhh!!

Sorry you've been feeling poorly Heather. Take it easy now and look after yourself.

glad to hear you're on the mend Heather. a heavy cold can make you feel rotten. the wild life and garden photos are lovely. I've discovered we've got blue tits in our nesting box which has been up and empty for 2 years. just hope the cats don't get them

I hope you'll soon be feeling much better Heather. You're right about the garden, we have been away for 2 weeks and I think we've come back to a different house! Our garden has burgeoned with growth while we've been away and our montana clematis is a picture. Your garden looks delightful.

You take care of yourself Heather.
BTW thanks for all of your comments lately it is much appreciated.

Sometimes some time out to look after yourself can be just what you need to re-charge. Hope you are feeling better soon.

I'm glad you're feeling better and can enjoy your beautiful spring.

Lovely to see your garden, I hope you're feeling better now.

Hope you are feeling much better soon. You need to give it away to someone, that way you'll get over it much quicker! LOL
Carole

I do hope you're feeling better now, Heather, I'm sure this horrible unsettled weather is responsible for some of these bugs about at the moment, it's soooo... cold.
We have blackbirds nesting in the garden too and this year one has imitated my DH's whistle, even more confusing than last year's ringing telephone.

Thankyou everyone for your kind wishes. I am feeling much better and have been planning alterations to the garden by way of enlarging our little pond. The best bit is that someone else is going to do the hard work for us!

Your garden is looking wonderful Heather....I would love to come and sit in it! So glad to hear you're feeling better now.
I've just been watching a squirrel wrecking one of our bird feeders - for the second time :-(
I think I'll get one of those metal cage versions.....

Lovely photos Heather. I am sorry that you have not been well. I hope you are starting to recover by now.