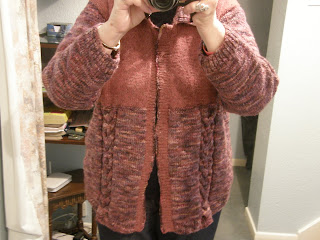 and cardigans to you too, I hear you cry!

Earlier this year when I was feeling flimsy, I decided to unpick and reknit three cardigans which had been languishing in my wardrobe for ages because I didn't like them. I bought three new patterns and set to work. I wound all the wool from each section into one ball so I would know if I had sufficient yarn to complete it. I soon found with the one in the photo above, that I would not have nearly enough to finish it and had used all the yarn from the back of the original garment by the time I reached the armhole shaping. I searched several woolshops before finding something of similar weight and a suitable colour to blend with my first choice. I think I succeeded - the colours are closer than they appear in my photo. I like it anyway and it's as warm as a coat - possibly a sign that we'll have a mild winter this year and there'll be no cause to wear it! It was expensive the first time round and cost even more to find yarn to finish it, so I shall want my money's worth from it. 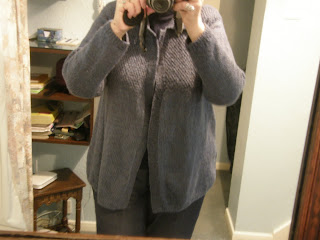 The second pattern was more co-operative and knitted up nicely, except that it fitted my daughter better than me - at least it went to a good home. I started work on pattern No.3 and all went well until I came to make the second front. I just couldn't get it right even after three attempts and much checking of the pattern. So, I unpicked it all AGAIN and knitted it up to the same pattern as the one I gave my daughter but in a larger size - you can see it in the pic above and I am wearing it now. It is fairly light so very useful and inspite of being a cheapish yarn, it looks quite nice and after all that messing about I have certainly had good knitting value out of it. 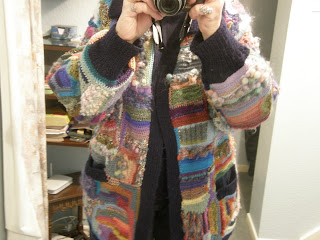 All of this brings to mind a cardy I made years ago - shown above - using the freeform knitting and crochet technique sometimes known as scrumbling. This is a great way to use up all those oddments - even short lengths - of wool and even embroidery threads. The idea comes from Jan Messent's book 'Wool 'n Magic' and advises that a template be made using heavy duty interfacing, so that the work can be pinned onto it to see how the shape is progressing. From memory, you start with knitting and cast on no more than 7 or 8 stitches, knit a square, cast off all but the last stitch then pick up and knit down one side and knit a few more rows. Cast off again, change yarn and start to crochet. It's a bit daunting at first but soon becomes great fun and the idea is to change yarns, colours, stitches and techniques as often as possible. I added a knitted dark navy welt, cuffs and collar to finish my jacket and because it is so colourful it goes with almost anything.
I found it really difficult to photograph these cardies. Lying them flat on the table or hanging them on coat hangers made them look awful and trying to be model and photographer made them fold and distort just where I wanted them to lie flat and smooth, but you get some idea of what they look like.
I am in thinking mode at present and nothing creative is emerging yet. Other bloggers are so prolific and seem to have lovely things to share every week. Perhaps I should make cards or ATCs to post here, but that would divert my thoughts from my next project.
Halfway through loading these pics, Explorer stopped working. As I had saved them as I went along I am hoping that I've only got one of each and not doubled up on the two that I had managed to load. I shall soon find out - fingers crossed.

Using the mirror is a great way to take the photos. I love the scrumble cardigan. I do hope that all this knotting does mean that we are going to have a mild winter although it would be a pity if you didn't get your moneys worth out of these beauties. I bought some wool for a waistcoat a couple of weeks ago and couldn't believe how much it costs now.

Wow....these are great Heather. I am in awe of your knitting skills!
I think big cardies are the most useful things to have in Autumn and Winter - I'd rather wear them than coats.
Do you use the Ravelry website?
Linda x

Linda - the word pants is one of my daughter's favourites when she wants to convey her dislike of something. I must check out that website - haven't heard of it till now. Thanks. My word verification is bilero - nearly a bolero - I could have knitted one.

wonderful Heather. I particularly love the last one. I did something similar and sorted out all my scraps into similar colours, tied them all together in different lengths and then knitted them in a simple Kaffe Fassett pattern. I've noticed recently - there don't seem to be nearly so many textured yarns about at the moment. mine's prechit - I always take pleasure in reading the word verification

I'm impressed at your perseverance in re-knitting your cardigans... with great results I might add! The scumble one is great fun. Thanks as always for your lovely comments on my blog.

When I read 'cardigans' I immediately responded with ' yes and I need one on today too!' as it is dismal and not Augustine at all (have I just coined a new word?)
I admire your patience and fortitude Heather - all that unpicking would have driven me mad.

Your cardigans look wonderfully snug and stylish. I particularly like the scumbled one. I seem to have outgrown (got too fat for)several of my cardies so a knitting spree could be called for, except that my hands complain when I knit. :(

Thank you for all your recent comments on my blog. My friend is still hanging on in there waiting, ever waiting..

Heather you are one of the most prolific bloggers I know. you do so many things with your time. The cardigans are great especially the Jan Messent one. She has a new book out too? A Maggi says wool is so expensive now. I too have knotted on one in Debbie Bliss yarn, so, so expensive and I just hated it. It's boucle and would not unpick, so I cut it up and use my embellisher on it instead.