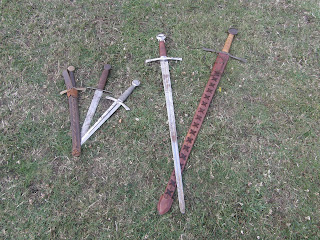 The weather was perfect yesterday morning as we set off towards Tewkesbury - sunshine and a lovely cool breeze - very necessary for the re-enactors as those medieval costumes look very warm. Our first port of call was the Living History Village and we saw these weapons laid out on the grass outside one of the tents. 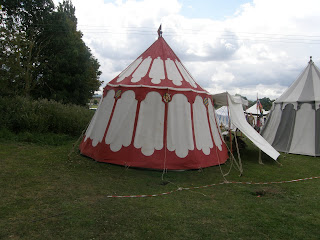 Most of the tents were plain white, but one or two were quite colourful. They were clustered quite closely together and I wasn't sure whether I'd be welcome if I wandered in among them. 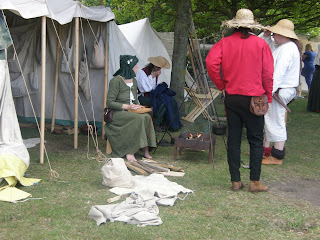 I stuck to taking photos of those around the edge of the village. I like the storage bags on the wall of this tent, and it was interesting to notice how much trouble people had gone to in their efforts to be authentic - wooden plates and sturdy pottery jugs and mugs, etc. No sign of modern cutlery, crockery, tea bags or sliced bread! 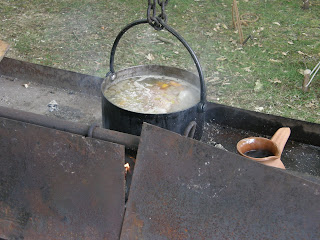 I thought this meal looked very authentic, bubbling away ready for a hungry soldier after the battle later in the day. This must be the medieval equivalent of a range cooker. 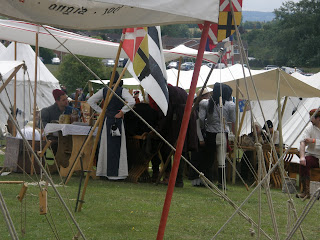 I think battle plans were being drawn up here. One man was doing all the talking and explaining that those taking part for the first time didn't have to join the battle unless they wanted to. He said he needed volunteers for plenty of other duties. 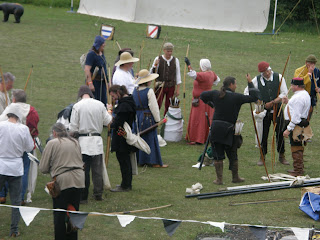 Free time for the villagers - they are preparing for an archery competition here. 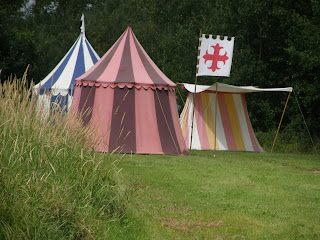 These tents were set apart from all the others and I think they must have been the King's camp. 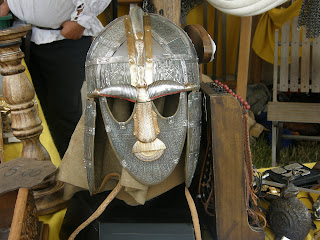 We visited the medieval market next, which was full of stalls selling equipment, clothing and other items that a re-enactor might find useful as well as those selling jewellery, books, gifts and craft items. There was armour for sale here but I couldn't resist a picture of this wonderful reproduction of the Sutton Hoo helmet. At another stall there were beautiful handcarved staffs and sticks, some with Viking dragon heads and Celtic designs. At yet another I saw huge bolts of woollen, cotton and linen cloth for those who make their own costumes. 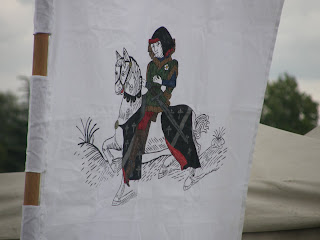 Some of the stalls flew banners and this one caught my attention. It looks like an illustration from Chaucer's Canterbury Tales. 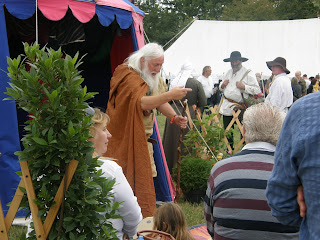 There were many entertainers on the site and here is the Story Teller at work, amusing adults and children alike. There were also musicians, jugglers, acrobats and magicians. 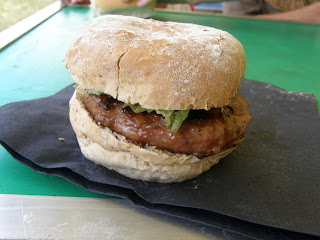 There were plenty of food stalls too - this was my lunch - a dainty bacon and rabbit burger. Not quite authentic but very good nontheless.

It was quite difficult to take good pictures as there were so many people everywhere. I saw quite a few interesting characters in wonderful costumes just strolling about, but the crush was pretty dense. 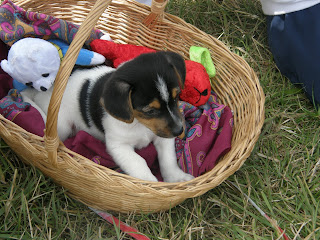 This must surely be the youngest visitor of the day - he is 8 weeks old and his name is Clint! Isn't he adorable? That's not a full sized shopping basket - he's really tiny. 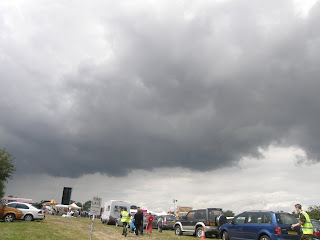 After a further wander around we went back to the car a sat in our camping chairs for a rest. It was then I noticed the sky and wondered how much longer it would be before the weather changed. It wasn't long before the heavens opened and we had to shelter inside the car. After staring at a wet hedge for half an hour there was no sign of it clearing so we decided to call it a day and head for home before the field had a chance to get churned up. We'd had a great time and it is a wonderful event which seems to get bigger and more popular each year. I hope they have better weather next year.

What is the matter with the spacing on my blog? I didn't leave half a yard of space at the end when I wrote it.

Great pics Mum! Love the swords on the grass. A great day - I'll send a link to Pauline so she can see how famous the dog is! xx

A very interesting post Heather, thank you. The Sutton Hoo helmet is stunningly beautiful. We are hoping to go to Sutton Hoo in September.

The Sutton Hoo helmet is great - and I LOVE the puppy, our Whippet would like a companion!

fab Heather. the w/e went so fast I didn't make it. that storyteller looks like Gandalf.

Better luck next year Carol - it's an annual event.

Your pix of the Festival are brilliant Heather - could almost feel the medieval atmosphere - thanks so much for sharing - it looks wonderful!

looks like a very fun and interesting event! Clint is adorable!

Blogger has a mind of its own when it comes to spacing...

Wonderful photos Heather, I am glad you saw as much as you did before the deluge. That Sutton Hoo helmet is amazing, and Clint sooks as if butter wouldn't melt in his mouth. Cheers