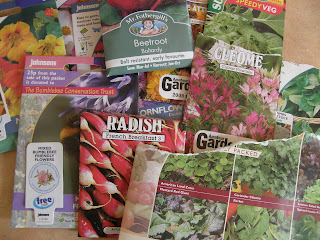 I've been having a lovely time lately trying to decide which of these packets of seed I can find room for. I'm not always successful with seeds but as we have a small garden it is never a problem! I always see it as a little miracle when a tiny shoot appears and then gradually gets larger and becomes food or flowers. 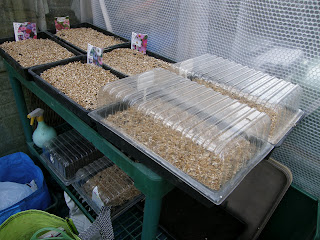 This is one half of our tiny greenhouse - full up already. The other half has two growbags containing six tomato plants and the three recycling bags are in the middle. There is just enough room for me to get in to water the plants and seed trays. I'm growing some flowers such as hollyhocks, cleome, love-in-a-mist, cornflowers and nasturtiums, though they are sown where they will grow outside - and salad leaves, radish, beetroot, chard and pea shoots. I read somewhere that you can get tasty shoots from a packet of dried peas bought from the supermarket - the ones you'd use for making mushy peas. I tried it last year and it worked well. 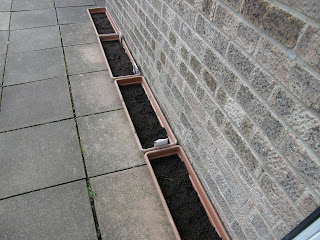 When a seed packet says 'sow where required to grow' I have to cheat and sow into these troughs in the hope that the plants wont know they've been moved if I do it carefully. We don't have the space to 'sow in drifts or natural swathes'. I'm trying out some bee friendly wildflowers so don't know if they will be a success or not. 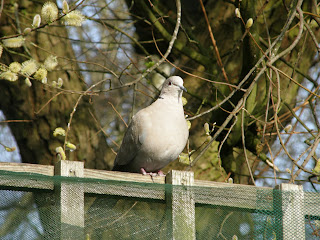 This noisy bird - or one of his/her friends - has been waking us up at the crack of dawn with it's persistent coo-cooing for the past few mornings. The collared dove which looked as if it might nest on our pergola has changed it's mind and gone elsewhere. I'm not sorry as neighbouring cats could have easily climbed up to the nest, not to mention the magpies which frequently come into the garden and used to raid the blackbird nests in our neighbour's conifers. 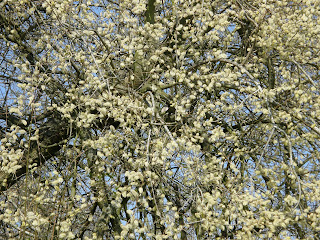 The willow tree which hangs over our wall is smothered with pussy willow catkins - I don't think I have ever seen them quite as prolific as this. They started out only a couple of weeks ago as little silvery grey dots, looking like tiny fledglings perched all along each twig. In that short time they have trebled in size and turned golden and fluffy. For the past few days the entire tree has been full of bumble bees enjoying the pollen, and there is a constant hum as they go from one catkin to another. It's a very soporific sound when we're out there having a tea break.

As soon as I scrub my hands clean from gardening, I get them covered in paint from printing with hand made letter stamps which is what I have been doing for my latest coursework. I do have a pair of those close fitting rubber gloves but invariably find I have started work and already have mucky fingers before I remember to put them on. I think I must have entered my second childhood and am having a great time making a mess!

The weeks rush by and I still haven't come up with any ideas for the two pieces of work I want to make for out next exhibition in September. If the design comes first it often dictates the technique to be used, but I have got a design yet and keep changing my mind as to which technique(s) to use. Perhaps I should just start playing around with a few as see what happens.

The tree looks beautiful and how lovely to have lots of bees buzzing about. You will be very busy with all the watering too. I am never lucky with seeds, I think I have paint fingers instead of green ones lol

It is always good to be busy and never good to be bored Heather. I wish I had your gusto in the greenhouse though. Every time there is a gale it blows glass from ours (wrongly placed) and so we have given up on it. In any case we always go away in May when things are at the stage when they need careful looking after.

sounds lovely Heather. my dad's just the same as you in his greenhouse this time of year! I can't be bothered with gloves - I just get stuck in and get dirty.

Hi Heather, I'm sure you'll come up with something before Septembe.