It's been another busy day. 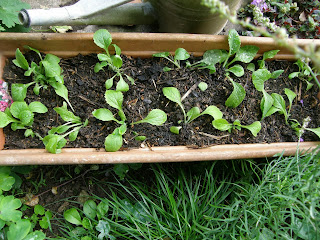 I sowed several packets of seeds earlier this year and some of them were almost climbing out of their seed trays so today was the day for dealing with them, but just as I had begun to pot up these seedlings daughter no.3 arrived so we stopped for coffee and a chat which was lovely of course, but work came to a halt. 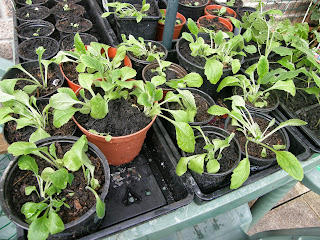 Most of the ones in these two photos are foxgloves - how many can one small garden cope with?!!  I started out planting them singly in the trough but was soon stuffing several in each pot or I'd have run out of soil and pots.  I think every seed in the packet must have germinated.   I had also sown honesty seeds which were growing into lovely healthy looking plants but a day later had been reduced to shreds by an army of tiny caterpillars.   Something had laid it's eggs on the underside of almost every leaf and they must have all hatched together.  I think the plants will survive although they look a bit battered and straggly now.

I got back to my potting again when my daughter had left but before long daughter no.4 and her husband arrived and as it was nearly lunchtime they stayed for a sandwich and cuppa and more chat.   Then after lunch our son turned up, so more chat and tea - but eventually I finished the job and just need to remember to check on them (the plants, not the offspring) and give them a drink now and then.  I wasn't expecting any of them (the offspring, not the plants) today, and love it when they drop in unexpectedly.

The other thing which has dominated my time recently has been reorganising my workroom.   I cleared a lot of stuff out some time ago but felt that better use could be made of the space and power points.  Below is my all important new blogging corner and - joy of joys - I no longer have to stand on my head to plug the laptop in or have to unplug something else first in order to do so. 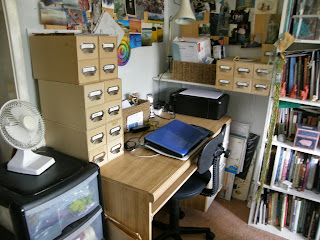 The sewing area is in the centre of the room and I can walk all round the machine table which frees up  storage space under the worktop by the window. 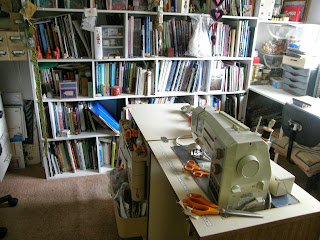 I can spread myself out on this worktop - it's ideal for my coursework for which I like natural light. 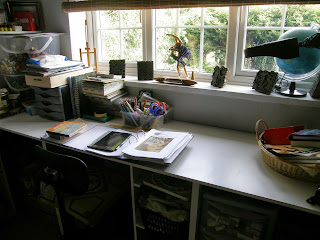 I still have too much 'stuff' but am getting better at clearing out and more will be leaving for the charity shop shortly.   All of this came about after we had the shower-room updated.   The decorating will be finished tomorrow and new flooring goes down on Monday, after which I hope the house can return to normal.

There has been no time for creativity and I am longing to get back to work on my grumpy little Isle of Lewis men.   They are all waiting for me in the red box you can see in the basket on the worktop.  Maybe next week, after I have done another chapter of coursework.
Posted by Heather at 13:05

It is looking good. Putting me to shame. Lots of my honesty plants in ghe garden have been eaten up. It was lovely having all the butterflies but I guess this is the price.

It is looking good. Putting me to shame. Lots of my honesty plants in ghe garden have been eaten up. It was lovely having all the butterflies but I guess this is the price.

One thing that does grow well in our garden is foxgloves and honesty, we never plant them, they just march around the garden each year spreading their seed. Love your studio arrangement I need to have a clean out too, one day.

Like Ro, foxgloves and honesty grow in abandon in my garden and I just sprinkle a few seeds into the ground if I want them to move to a specific place. Your workspace is looking lovely.

I love both foxgloves and honesty, but can only wish as they will not grow in this climate! Your cleanup has been magnificent - still putting off mine till after Christmas. Cheers

ooh you are busy Heather. love your creative space - you are lucky!

Wow! I've got work room envy now! What a great space you've created.
I'm certainly not organised enough to have even thought of planting for the spring yet, better get thinking.