How to improve a dismal grey day. 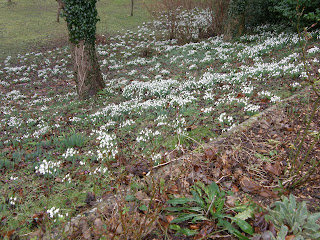 After doing the weeks' shopping yesterday, we called in at the Rococo Garden in Painswick to take a look at the snowdrops. People come for miles to see them and there were two coaches as well as dozens of cars in the carpark. We arrived at about 1pm so headed straight for the cafe and a delicious bowl of homemade soup before going out into the garden. 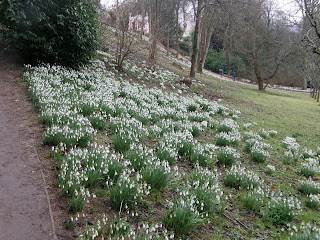 It was raining gently all the time we were there and the paths were a bit slippery in places. The snowdrops are not fully out yet and will be good for another two or three weeks I think. The garden is situated in its own little valley with quite steep slopes in places. 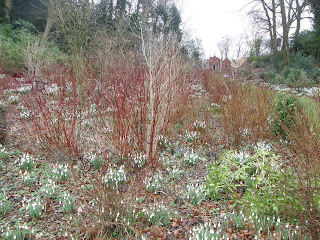 I loved the colours of the dogwood stems and all the snowdrops growing up among them. 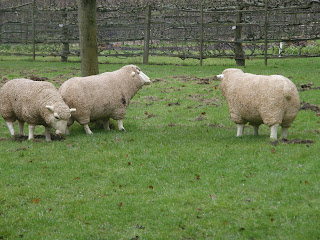 Couldn't resist a shot of these sheep which look so realistic. From a distance you wonder why they don't move! 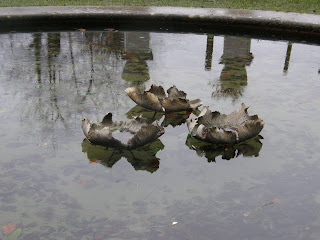 I love these leaf sculptures which sit on metal tripods in the shallow water, but look as if they could float away at any moment. 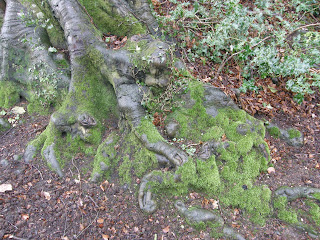 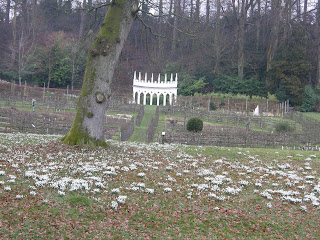 A view across the garden. In the middle distance is the kitchen garden where the owners grow crops to supply the cafe with fresh produce. There are vegetable beds surrounded by cordonned fruit trees. It should look wonderful by May or June and we hope to go back again to see it. 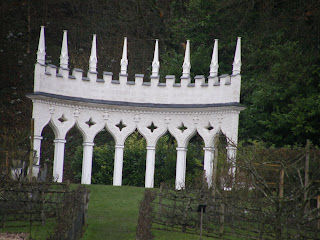 A closer look at these graceful arches. The original garden was laid out in the 18th century with a strong Italian influence. The chance discovery of a painting from that time enabled the present owners to recreate the garden as it might have been. 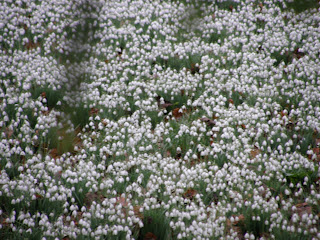 In many places the snowdrops are so thick you couldn't walk through them - they look like a blanket of snow. 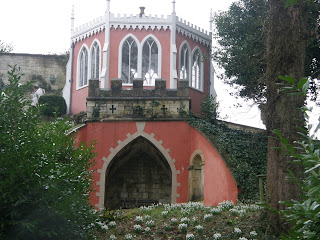 At the top of one steep rise we came to this little temple and sat on the seat under that archway to shelter from the rain and get our breath back! It was so peaceful inspite of all the other visistors who seemed to melt away into various parts of the garden. We could only hear birds singing and the gentle patter of raindrops on the laurel leaves. To the right of this picture the path rises again and turns sharp left to go behind the temple and you can go into the room up there whose windows overlook the entire garden. 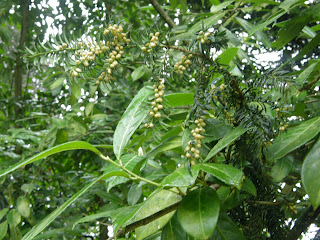 On my way round I noticed these little yellow flowers on the yew trees. They look as if they are growing on the laurel here as the branches grew into each other. I know yew has red berries later in the year but have never noticed any flowers. They look almost like miniature mimosa. 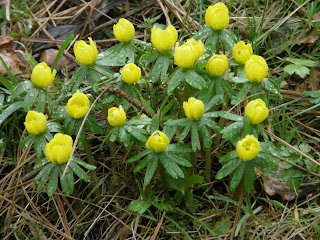 Among the snowdrops, here and there, grew clumps of these lovely aconites. I have tried to grow them without success but will have to have another go. 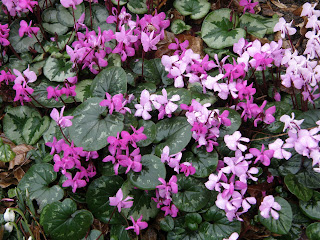 There were plenty of these tiny cyclamen too. I can grow these and they come back each year.

We came home having had quite a bit of exercise up and down all those steep paths, rather wet and with very muddy shoes, but looking forward to a return visit later in the year.
.
The man is cementing in some braces for the pergola this morning. I am trying not to notice where he has to put his feet as of course the posts are sunk in to the garden border. So far, so good - may be he likes gardening in his spare time!

beautiful, thanks for the show and tell

Beautiful Heather - I have been to Painswick in the Summer (aren't there a lot of evergreen trees - yew? - around the church?

Isn't it good to see spring coming on apace.

Painswick and its sculptures was on a tv programme at the weekend so it was interesting to read your report of your visit Heather. Despite the rain it all looks beautiful. Maybe Spring is on its way after all :-)

lovely pics Heather. yet again you've made me realise how little I visit my local area and should make more effort!

Your pix are lovely Heather - especially the mossy twisted tree root - oh! such imaginings of fairies in residence ........ and all those gorgeous snowdrops!

What a lovely outing you had Heather! I love snowdrops...such brave little things :-)

I love snowdrops, it's always so wonderful when they show themselves! Lovely photos

What a lovely place. And the carpets of snowdrops are magnificent - so thick and luxuriant! Sometimes gardens look best in rainy weather, the colours seem to become more luminous, especially with coloured stems like dogwood.

Lovely photos - those 'floating' leaf sculptures are great!
It looks as wet down there as it's been up here....and it's forecast to be awful this weekend too :(